By : Comments Off on Keating–OnSight–Melanson (KOM) Colorado Poll May 2020

Keating Research, OnSight Public Affairs and Mike Melanson have teamed up on the Keating–OnSight–Melanson KOM Colorado Poll™ which provides informative, accurate results and was Colorado’s most accurate in the 2018 Colorado Gubernatorial race and in the 2016 Colorado Presidential election. The new Keating–OnSight–Melanson KOM Colorado Poll™ conducted online May 1-3, 2020, is the most recent installment in our effort to track voter opinions on the top political and public-policy issues of the day. Please consult the topline results for the full wording of the questions in the KOM Colorado Poll™.

A 3-to-1 majority of Coloradans support Governor Polis’ Safer-At-Home order.

An overwhelming majority (78%) of voters in six metro-Denver counties (Adams, Arapahoe, Boulder, Broomfield, Denver and Jefferson) also support the decision by their local officials and Denver Mayor Michael Hancock to extend the stricter, local Stay-At-Home orders through May 8.

Governor Polis receives high marks for his handling of the coronavirus pandemic (71% approve to 19% disapprove) and has also seen a significant increase in his favorability with voters — up to 66% favorable from 50% favorable last summer.

Mayor Hancock receives an equally strong rating from Denver voters for his handling of the coronavirus pandemic (69% approve to 18% disapprove).

Most Coloradans (8-of-10) agree that face masks should be required.

A majority (78%) of Colorado voters agree that people should be required to wear face masks or face coverings when they go to a store, bank or workplace; while only 16% oppose requiring masks in public. In these hyper-partisan times, face masks are a non-partisan issue, supported by Democrats (87%), Unaffiliateds (79%) and Republicans (68%) alike.

Colorado is not out of the woods — financially speaking — but voters remain optimistic.

The majority (62%) of Coloradans are of the opinion that the coronavirus will cause a long term economic downturn that will last for several years, compared to the minority (26%) who believe the coronavirus is a short term obstacle and our economy will bounce back soon. However, the concern about an economic downturn and coronavirus pandemic has not dampened optimism about the state with a 56% majority saying Colorado is heading in the right direction, which speaks to the value Coloradans place on leadership during this crisis. 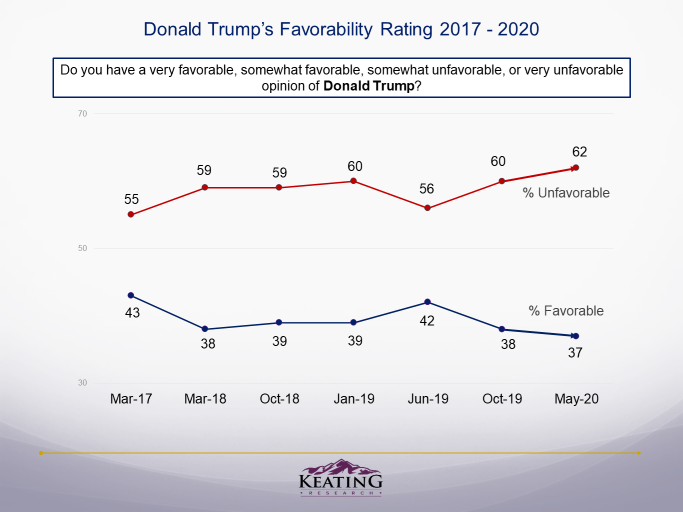 Trump Is Disliked Now More Than Ever 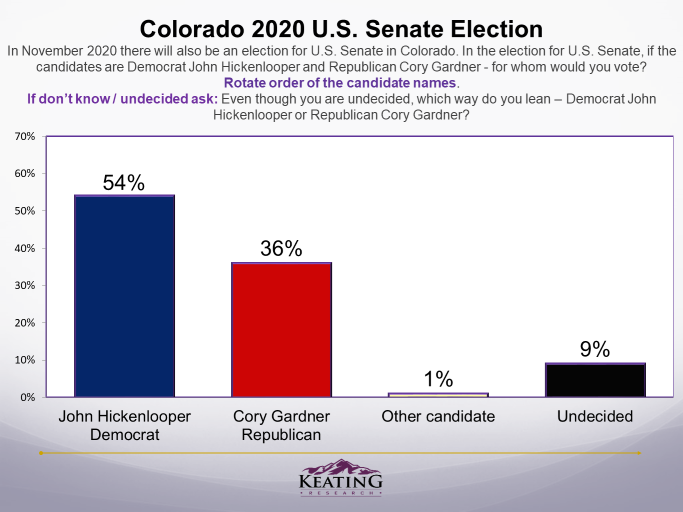 Keating Research is recognized by Democrats and Republicans alike as providing extremely accurate polling in Colorado. These Keating–OnSight–Melanson KOM Colorado Poll™ results are based on a sample of 600 online surveys among likely November 2020 voters statewide in Colorado. The poll was conducted from May 1-3, 2020. The worst case margin of error at the 95% level for the sample of 600 is plus or minus 4.0%. Keating Research, OnSight Public Affairs and Melanson paid for and conducted this poll.