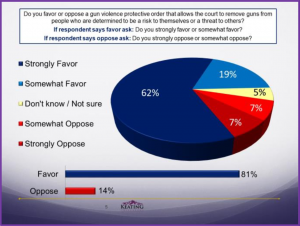 In a poll of likely November 2018 voters statewide in Colorado, 8- of-10 (81%) favor what is commonly known as a Red Flag Law – a gun violence protective order that allows the court to remove guns from people who are determined to be a risk to themselves or a threat to others, while only 14% oppose it.

The passion is on the side of those favoring this red flag law: 62% say theystrongly favor it compared to only 7% who strongly oppose it – a ratio of nearly 9-to-1.

The Red Flag Law is also supported by strong majorities of voters across every key demographic group:

This Red Flag Law is also broadly favored by voters in all of Colorado’s key regions – including in the Denver / Boulder / Broomfield Region (88% favor), the bellwether counties of Arapahoe / Jefferson (76% Favor), the suburban counties of Adams / Douglas / Larimer / Weld (84% favor), the Colorado Springs Media Area (77%) and in the Rural Counties (79% Favor).

Most telling of the breadth of support for the Red Flag Law is that it is supported by 3-of-4 voters who live in a household with a gun (77% favor). The overwhelming support seen here for this Red Flag Law suggests that getting this done in the 2018 Legislative Session is very important to Colorado voters.